Recently I was editing a novel where the author had used the “text method” of writing. I don’t mean that they included texts in their story. I mean that they wrote “dont” instead of “don’t”.

So I’ve just spent an hour straight hitting “Ctrl+F” (Find and Replace) to fix the variations of “dont” that have appeared throughout the story. I’ve literally looked at the same one word over and over, to the point where the correct word, “don’t”, doesn’t even seem like a real word anymore.

I was telling a well-educated friend of mine about it and he told me that this is called semantic satiation. (Not to be confused with Semantic Saturation, the progressive rock metal band.)

Semantic satiation is the proper term for when you’ve been looking at a word for so long that it loses its meaning to you and just looks weird. It happens because the neurons that are responsible for that word are temporarily worn out from overuse. But what can I do about it?

It’s not really a problem as such when I’m proofreading like this. But it really messes with your head. You start questioning everything. Like, what makes a word real? Why isn’t “donnt” a word? If it was a word, what would it mean? What does any word really mean? (*head explosions*)

Now, let’s get serious for a second.

If you’re writing, and you keep seeing yourself write the same word over and over…

…or you find yourself using the thesaurus to find more and more alternatives to one word (“small”, “minute”, “miniscule”, “mouse-sized”, “smaller than your face”)…

…or you wonder, “Is it okay if I use this word three times in one sentence?” (Spoilers: The answer is no.)…

…Then your reader may become a victim of semantic satiation! Which would be bad! Their head might really explode, and then you’d have killed a person! Which would make you a terrible person!

The take-away lesson from today’s post is simple. Don’t kill your reader by using the same word over and over. Figure out which words you overuse, or ask your favourite readers to tell you (family friends, online beta reader community), and then use “Ctrl+F” to search and destroy.

So, now that we’ve made our writing better, time for a well-earned break – with a donut. A big, fat, sweet, chocolate-glazed, melt-in-your-mouth soft, jam-filled dollop of goodness. 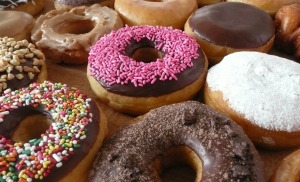 ‘Donut Fridays’ from All things mac and cheese (Tumblr) 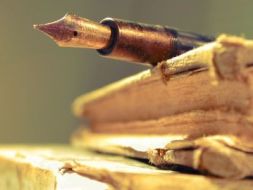