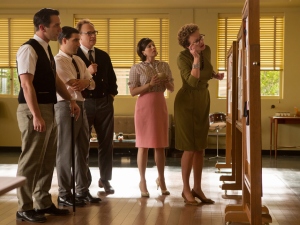 Richard Sherman: Room here for everyone / Gather around / The constable’s “responstible”! / Now how does that sound?

Richard Sherman: We made it up.

I edited a book once by an author who used words wrong.  Just plain wrong.  There’s no other way to say it.

He said “supposably” and “supposedly” (those aren’t real words!) instead of “suspiciously” (which is not even close to the meaning of those “words”).

When I called him on it the first few times, he got all snippy.  “How do you know what’s a real word and what isn’t?  I hear people saying ‘supposably’ all the time.”

“Um, that’s my job.  I get paid to know correct grammar and spelling.  And that’s honestly not a real word.  And even if it was a real word now, which it’s not, it’s still not a word that a peasant would have used in medieval times.”

There’s a great xkcd comic strip (‘Period Speech’) depicting Shakespearean players talking in Olde English, which is captioned: ‘A few centuries from now, all the English of the past 400 years will sound equally old-timey and interchangeable.’ 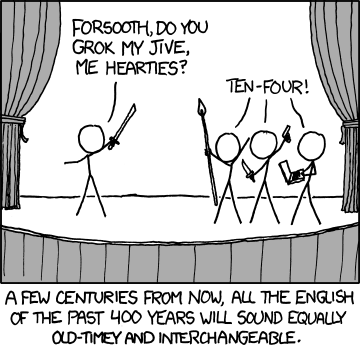 It’s certainly true that language won’t mean then what it did; it never does, after the time period in which it was invented.

In a similar vein but in much more delicious detail is the Word Hunters series (UQP), which I’ve recently devoured.  They’re about Lexi and Al Hunter, two kids who stumble upon a magic dictionary that takes them “word hunting”, time travelling through each of the major changes in the usage and meaning of certain words.  My favourite was one of the first words, ‘Hello’, which began as something like “Ah rou”, a French exclamation of “Help, over here!”, which became “Harrow!” as an English warning of “Look out!”, and then became “Ahoy” or “Hallo” when calling to seamen from another ship.  Because of its nautical uses, Alexander Graham Bell, co-inventor of the telephone, and a navyman himself, wanted people to answer the phone with a cheery “Ahoy!”  But Thomas Edison had heard of a cool new word, “Hello”, and he had already decided that he would answer the phone thus – and everyone who spoke English followed him forever after.  The stories are all delightfully exciting, terrifying, or just plain fascinating, if you’re into either history or books and words.

But seriously, the dynamic nature of language creates a dilemma for editors.  It’s easy to tell an author they’re just using a word plain wrong, but can you always prove it?  Just because a dictionary says that a word should be used one way, does that mean it’s the only right way?

Well, no.  And frankly, that kills me a little bit.

Because people just go around using words however they like!  They don’t care where the phrase or word came from; they just want to use it all the time.

For example, my husband used to love the phrase “like a boss” until I explained to him that this phrase means “like a pimp” and was originally used only to describe big deals made by leaders in the prostitution slave trade or the drug smuggling trade.

Other people say “YOLO” after everything they say, seemingly ignoring the fact that it literally means “you only live once” and stands for a cultural revolution towards narcissistic behaviour.  It’s like they think it’s the new “lol”, but I’m telling you, it’s really, really not.  The meaning of words matters, and it should change how we use them.

One of our favourite dictionaries in the Western world

Dictionary editor Anne Curzan and lexicographer Erin McKean talk about what makes a word real in their easy-to-listen-to TED talks.  Erin McKean says that dictionary writers and editors are viewed by the public as being all-knowing literary gatekeepers who know definitively which words are ‘real’ and which are ‘fake’.  But guess who they listen to when they’re deciding whether or not a new ‘word’ should be included as a ‘real’ word in the dictionary?  The public.  So if enough people use words – like the new verbs ‘tweeting’ and ‘to Facebook’ – then they have become words.  According to dictionary makers, this makes them equally worthy of inclusion into the dictionary as older words like ‘tweeting’ (for birds) and ‘to book’ (for meetings or appointments).

So it doesn’t matter whether or not I like a set of syllables being used as a word, because if enough of you readers and writers and speakers and listeners use it, then it is a word.

So here’s the rub.  Language is in your hands.  Entirely.  I beg you to remember, with great power like this comes great responsibility.

Use your power for good, not evil.

P.S. This does not mean I will ever accept “supposably” as a real word.  Never, ever.  You can put that on my gravestone.

What words or spellings do you know of that were once rejected but are now treated as ‘real’ words?